The party ruled – the proletariat won!

This is how Iva Doichinova, a friend, colleague for the cause and PR of the Center for independent living, concludes the events of last Thursday. She claims to have said it in other words, but the point is the same!

On a hot day for a session of the Sofia Municipality Council, a group of people with disabilities, their assistants and friends gathered for a permitted protest. We wanted ordinary things: (1) not to review every year access to the Independent Living Assistant (ILA) but to decide either for a longer period, for example five years. Also in case of a changing the life circumstances, such as improving or worsening of the health, marriage or childbirth. (2) To improve the methodology for assessment of the needs and the number of hours per month, which the person needs in order to overcome his physical disabilities. (3) The separation of the mechanism for providing an assistant for adults and children – the status and needs of these two main groups of people with disabilities are completely different. For four months, our efforts to provoke a real debate were systematically and consistently ruined  through neighborhood-type quarrels at public forums and a “spontaneous” press conference of nationally represented organizations in Sofia Municipality. The journalists also received a PROTEST NOTE – a new genre for civic expression – although it was not clear against what they protested, in fact they expressed support of the local government’s decisions. There was no clear fundamental arguments  but primitive, populist clichés and manipulative claims such as “the service is unique not only for Bulgaria but also for Europe.”

Later, in the political radio program “Sunday 150” Diana Indjova made sensational disclosures and found confirmation of their authenticity in ” the tension around Sofia Municipality, which is created by some people with disabilities asking for hush money”. She is from the Center for Psychological Research (and from the ghost organization “Global Movement of People with Disabilities”).

Therefore, the day when the Sofia Municipality Council held its last session for the passing political season, came. Provoked by the “dialogue” with the municipality, people with disabilities, for whom access to personal assistance (the European equivalent of Sofia’s “independent living assistant”) is not just money, were protesting in front of the municipality. For them personal assistance is a way to sit in a wheelchair, to do their daily duties, to go out on the dirty and inaccessible streets of Sofia. They wanted to wish the municipality councilors a good day and fruitful work by asking them to vote wisely, not by political command. There were two plans for the end of their working day: Plan A. – greeting them with a flower, if they did not vote for the terrifying changes in the regulation; and Plan B. – a cane for the support of the SYSTEM, which is LIMPING.

Vanya, Margoto, Tanya, Pesho and a dozen other people with disabilities greeted with smiles the municipality councilors before entered the building. Mitko was following the debates on the Internet and informing us about the discussed paragraphs.  Ours was the 22nd – the analogy with “paragraph 22” came naturally: if you do not work – you do not have an assistant; you do not have an assistant – you can not search and find a job!

Councilors were progressing slowly on the agenda. The air temperature was rising rapidly to 40 degrees Celsius. Therefore, we started freshing ourselves with cold water, blowing with fans, drinking soft drinks. Some people came to exspress thier support and left, others stayed longer, two, who learned from Facebook about our protest – came and stayed until the end! A deep respect to their civil empathy!

At 2:00 p.m. came the smashing but expected news: the SMC voted on all changes to the regulation proposed by the administration. Our last hope for political decisions, based on common sense and competence, has faded. We started fussing and wondering, “What are we going to do now?”, “Does it make sense to stay here?” The heat was unbearable – people were feeling worse, they also realized that many of them would stay without assistants next year and their lives will be locked between the walls …

The national “represented” organizations, which were guests of the administration, started to leave the cool rooms of the deputy mayor. They passed with a sarcastic smile the physically exhausted but emphatic protesters. We waited without casualties – but very close to fainting – while the municipal councilors left the building at 5:00 p.m.. One by one, unfamiliar faces passed by our eyes … I recognized Ivan Neykov and walked towards him with a cane. He refused to take it – he did not recognize himself as a part of the LIMPING SYSTEM. He stopped to listen to a quarrel between his colleague and Vanya, who with a final strength, was explaining to him that next year she would not walk again, and without an assistant she could not find a job, even she wants to work … Petyo Kichashki from Vidin, although without using personal assistance, was explaining how “we are locked in paragraph 22”. Our arguments did not convince the municipal councilors, the mayor and other factors in the municipality. They saw in our demand “betrayal” (going to the political party opponent), “elitism” (the same people cannot constantly use the service) and other extremely unfounded “conclusions”. They used “nationally represented organizations of and for people with disabilities” as an excuse to comply with the “majority” in order to reject an established European practice. And the “majority” knows why they betrayed the interests of people with disabilities – it’s just about power and money. A recently published report on the work of the National Council for the Integration of People with Disabilities states everything precisely and clearly: “Policies for people with disabilities in our country are structured by consolidated (but illegitimate to the public) economic interests. They are completely disguised under the camouflage of ideological opposition between the so-called “Medical” and “Social” model of disabilities …”

THE DARK FUTURE, but not for long time!

We wrote a hundred explanations why the next changes in the regulation for an independent living assistant (ILA) are untenable and destructive. We made a series of meetings – with Mayor of Sofia – Fandakova and with the chairman of the GERB-group of councilors in the Municipality Council. We participated in various forums – in the Public Council for Social Policy at Sofia Municipality, in the crowded gathering at the Ombudsman of the Republic, in the meetings of standing committees. However, at its last session, for this political season, the Sofia Municipality Council VOTES THE FOLLOWING:

In general, the regulation of ILA remains “lame” because it has:

• FROM A SERVICE FOR BETTER QUALITY OF LIFE, ILA BECOMES AN INSTRUMENT FOR EMPLOYMENT WITH DOUBTFUL RESULTS;

• THE REGULATION WILL CONTINUE TO BE USED OF INCREASING THE INCOME OF FAMILIES IN WHICH THERE IS A PERSON WITH A DISABILITY AND NOT AS AN ASSISTANCE FOR HIM;

• THE ANNUAL APPLICATION PUTS THE LIVES OF PEOPLE WITH PHYSICAL DISSABILITIES INTO INSECURITY AND UNCERTAINTY;

• THE SCORING DOES NOT TAKE IN CONSIDERATION THE INDIVIDUAL NEEDS AND PLACES ALL CANDIDATES IN ONE POT;

• NON-TRANSPARENCY IN THE CONVERSION OF POINTS IN HOURS FOR ASSISTANCE, PAID IN MONEY, CREATES PRECONDITIONS FOR CORRUPTION.

• THE DEFINITION OF “ACTIVE SOCIAL INCLUSION”, WHICH IS THE MAIN OBJECTIVE OF THE REGULATION, IS UNCLEAR AND THE APPLICATION OF THE REGULATION IS EXPOSED TO THE SERIOUS DANGER INTERPRETATIONS;

• THIS GIVES THE OPPORTUNITY FOR REVERSAL OF THE IMPLEMENTATION OF THE REGULATION – FOR EXAMPLE, GOING TO A DAY CENTER IS NOT INCLUSION, BUT EXCLUSION, BUT IT ALSO GIVES ADDITIONAL POINTS TO THE CANDIDATES FOR ILA.

• THERE IS A POSSIBILITY FOR THE ADMINISTRATIVE MANUPULATION OF THE COMMISSION, WHICH DETERMINES THE HOURS FOR ASSISTANCE ON AN UNCLEAR PRINCIPLE AND PLAYS WITH PEOPLE’S LIFE.

THE REAL PROBLEMS OF THE REGULATION ARE NOT SOLVED, namely:

• The assessment of the users, made by the municipality administration itself, shows that 30.9% of the respondents enjoy more social contacts; 28.64% share a better financial situation and only 4.16% have started to work. In 90.3% of cases, no one in the family of users has started to work against just under 10%, who have found employment other than an assistant to a relative with a disability. 76.8% of the respondents state that their assistant is a member of the family. This means – no more, no less – that the “service” is used not to achieve independent living and social inclusion, but to increase incomes as a bonus to social support;

• The lack of social services in the capital (and in the whole country) makes the inflow of applicants for ILA disproportionately greater than the financial capabilities of the municipality. The European practices show that personal assistance is just one of many social services aimed at people who are willing to take over the service’s management by themselves. Who are trained in advance about what is independent living with personal assistance. How to assess their needs, how to find assistants and manage their employment, how to report and so on. In Sofia, there is social patronage and many day care centers. In London, Berlin, Brussels, Stockholm, Oslo, Vienna, Warsaw, Prague and everywhere else there are different types of support at home, offered by the municipality and private providers, allocated money for families, which care for a person with a disabilities, as well as daily forms for hourly rehabilitation and other activities. 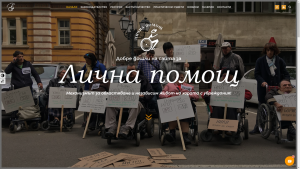