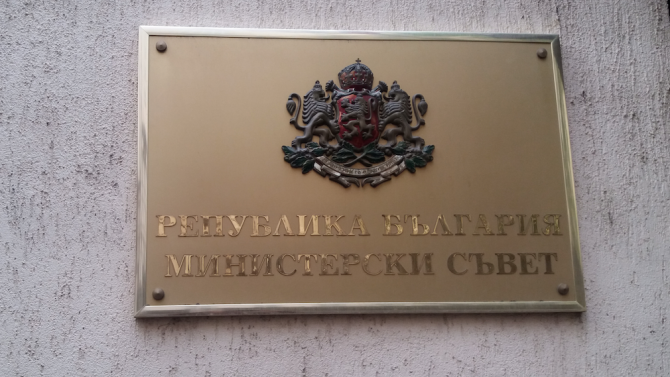 We have already lost the number of these strategies for people with disabilities, but on the other hand, we feel their imperfections.

The draft Strategy for People with Disabilities 2021 – 2030 represents 50 pages of common findings and intentions. The need for a Disability Strategy is indisputable, as disability policies need to be radically transformed – from understanding what disability is to building a public environment for all.

You can download our full statement in Word or PDF format. 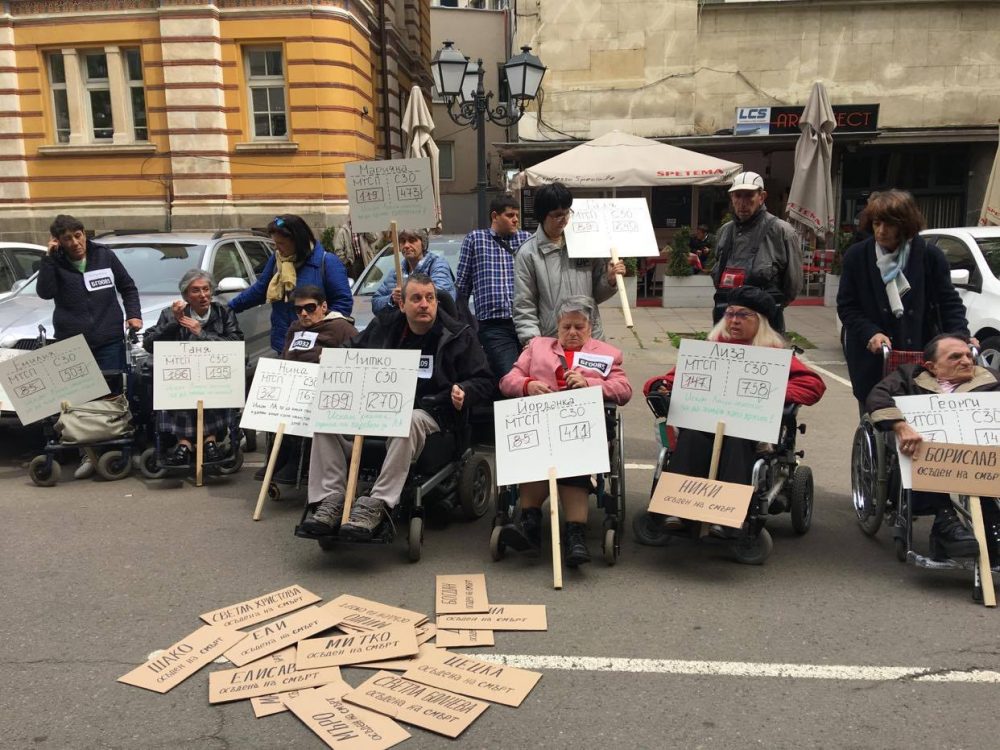 World Disability Day, December 3, is an occasion for various actions – some “celebrate the holiday” and hold banquets, others raise serious issues. The Movement for Independent Living does not celebrate December 3 as a holiday but as an occasion for public discussion of pressing issues, which you can find in any country in the world. Unfortunately, Bulgarians with disabilities are among those with many problems – from the inaccessible environment to hard-to-reach employment, from outdated technical support for mobility and daily services to personal assistance, from inaccessible transport to the unreformed healthcare system.

This year we offer a discussion about personal аssistance – the tool of empowerment and support that helps people with disabilities to live independently even in the absence of accessibility in the environment (completely unacceptable fact!) or using loving relatives like personal assistants, who are ready to give up their own lives to care for a person with a disability in the family.

On the 3rd of December from 15.00 to 18.00, we will gather at the usual place lately – on the World Wide Web – to talk about personal assistance in Bulgaria. We will hear the story of Jamie Boling from Stockholm about the “gold standard” in personal assistance set by the Swedish government and active citizens with disabilities 30 years ago. We will find out from Minister Sacheva what the government’s view of the law is and its current effect. Users of personal assistance will share their personal experiences, and Teodor Mladenov will present a tool to assess the mechanism of personal assistance and the way it works to understand “where we are.”

To participate in the meeting, please register on this link until 01.12.2020. 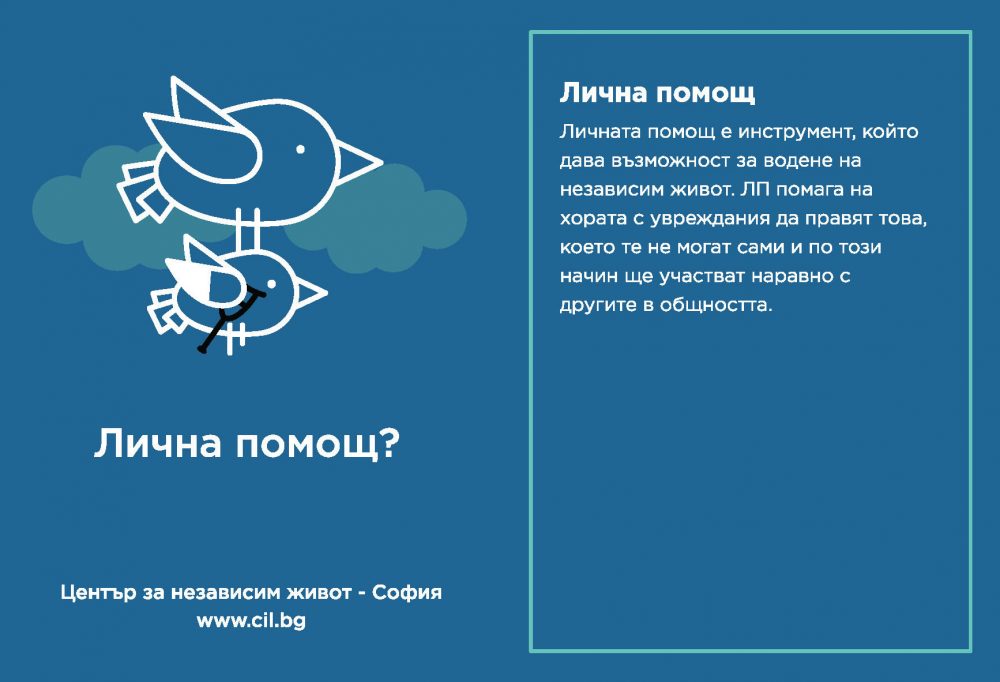 PERSONAL ASSISTANCE IS SPOTTED AGAIN BY THE AUTHORITY

The government is proposing changes to the Personal Assistance Act again, passed only a year and ten months ago, only showing the need for adjustments. But unfortunately, these are not the changes that await people with severe physical dependence, but on the contrary – to the detriment of the people most in need of personal assistance.

Of course, we cannot fail to state our position and state that the proposed amendments to the Personal Assistance Act again do not achieve the main goal of the personal assistance mechanism, which is a qualitatively different political instrument fоr social assistance or social services such as we know them well enough in Bulgaria.

You can read the full text in the form of attachments in Word or PDF.

The law for people with disabilities needs serious amendments and additions, but in a completely different direction from the one proposed. Although new in date, its claims to reform – in philosophy and practice – are greatly exaggerated. Moreover, the current law repeats all the disadvantages of the previous law and does not comply with the UN Convention on the Rights of Persons with Disabilities. The draft amendment to the LPD does not correct the existing deficits of the law.

Contrary to the recommendations addressed to the Bulgarian government by the UN Committee on the Rights of Persons with Disabilities, the effect of the individual assessment is limited to determining the hours of personal assistance, the need to adapt housing and car. The remaining benefits under the LPD – monthly financial support, technical aids, and balneotherapy – are provided based on the decision of the MLEC (Medical-Labor Expert Committee) and the requirement for individual assessment is dropped for them. If the UN Convention is read carefully, an individual needs assessment must become a key factor in supporting people with disabilities.

Meaningful changes in the Law should limit the effect of MLEC decisions and strengthen the functions of individual assessment, which is the exact opposite of what is currently proposed. Medical expertise has its place for social security purposes, while support for social inclusion must be based on the individual needs of each person with a disability.

The transfer of responsibilities and financing of technical aids and medical devices to the Ministry of Health and the NHIF (National Health Insurance Fund) is not substantiated with goals, evidence, and motives. It is said that this activity requires more medical knowledge and less social knowledge. This statement is false for several reasons:

Agency for People with Disabilities

The proposed postponement of the restructuring of the Agency for People with Disabilities is unacceptable because it contradicts the recommendations of the UN Committee on the Rights of Persons with Disabilities, as well as good public policy practices (in this case on disability) based on reliable information, analysis and evidence of their appropriateness. The abolition of the Agency’s obligations to collect information, make analyzes, and provide them for the political process is extremely unacceptable from any point of view, especially in times of limited public resources, deepening financial crisis, and social inequalities.

You can also download this statement in Word or PDF format. 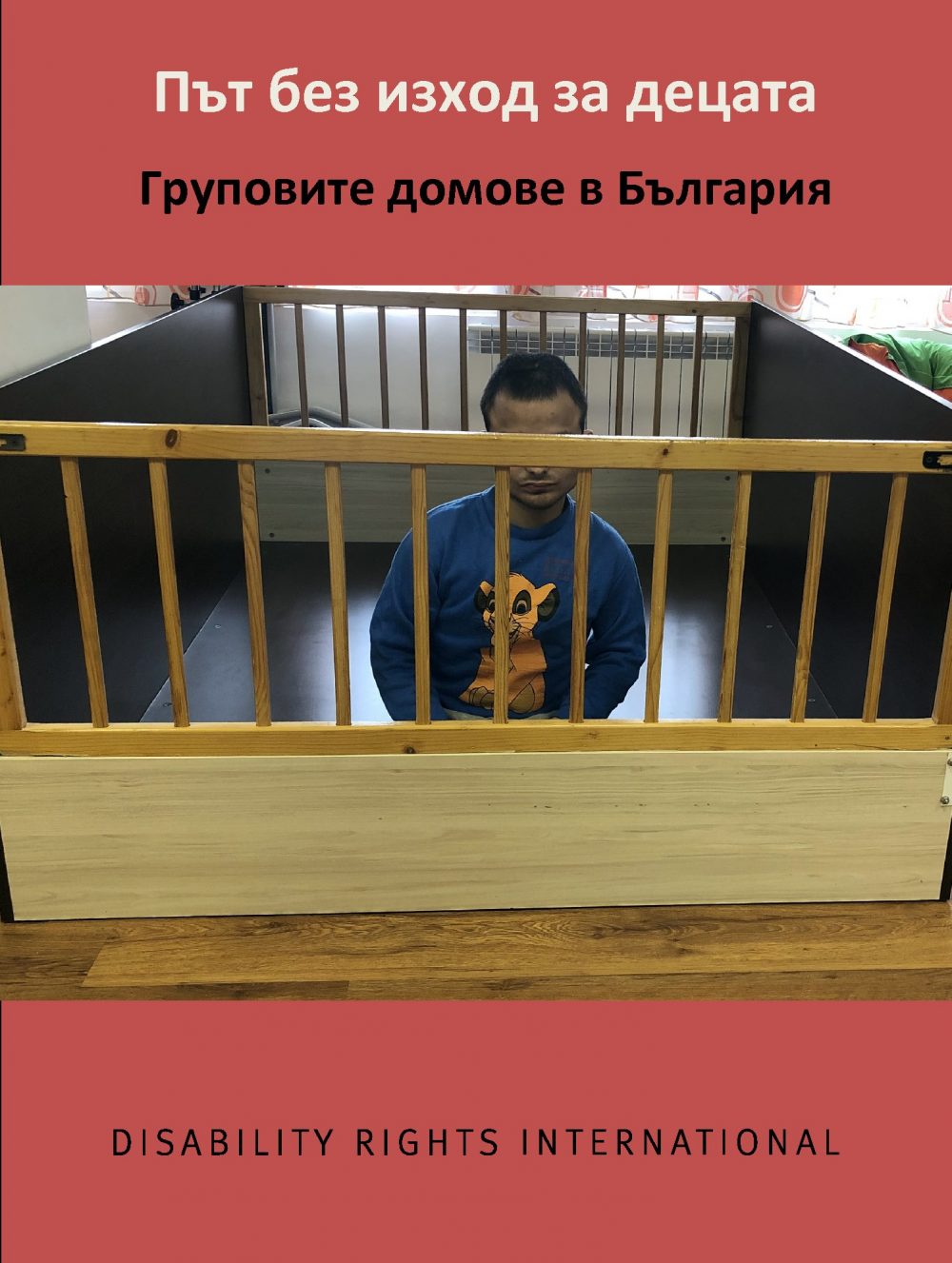 “Road to no exit for children: group homes in Bulgaria”

The International Organization for the Protection of the Rights of Persons with Disabilities (DRI) has published a report entitled “Road to No Exit for Children: Bulgarian Group Homes”. It documents conditions and practices that are inhumane, degrading, and risky for children accommodated in Bulgarian group homes. The main finding of the study is that reforms in Bulgaria, supported by EU funds and other international sources “are replacing the system of large, outdated and falling apart orphanages with new, smaller buildings where services continue to function the old way as traditional institutions.”

END_OF_DOCUMENT_TOKEN_TO_BE_REPLACED 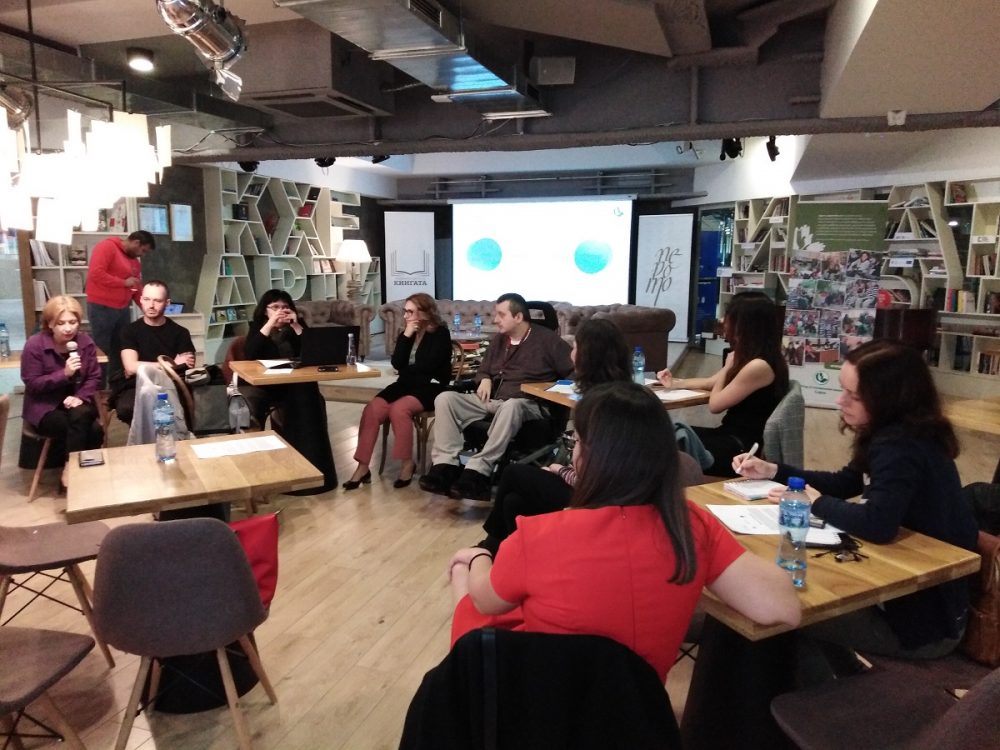 On November 7th, 2019, at the Peroto (The Feather) Literary Club, we announced the launch of our joint initiative with the Department of Political Science at Sofia University, the Alpha Research Sociological Agency, and the Equal Partnership Foundation. The project is called “Inclusion and Disabilities” and is funded by the Active Citizens Fund of Bulgaria.

Disability policies in Bulgaria are made conjectural and populist without analysis and research of their effectiveness and efficiency and far from the principles and values ​​of the UN Convention on the Rights of Persons with Disabilities, ratified by Bulgaria in 2012. Thus, completely new legislation, drafted last calendar year under the motto “the system kills us” and pressured from parents of children with disabilities, preserves the killer system and bears the flaws of the previous law – a leading principle in medical evaluation, wasting money, limited access to technology, relatives-assistants and so on.

The Inclusion and Disabilities project aims to generate a methodology for monitoring disability policies that provide – in an objective and scientifically sound way – evidence of the appropriateness of certain policies. The development of a series of analyzes will show the need for deep reforms in the social field, which will be the basis for decision-making formulation of public policies, and a debate on the degree of inclusion of people with disabilities in society.

The set of activities – sociological research, analysis of empirical data, the publication of reports, public events, meetings with politicians and administrations – are aimed at changing attitudes and reaching a public consensus on reforms in disability policies. In the course of the work, an index for the inclusion of people with disabilities will be developed, which will be tested and implemented systematically in the future, so that the project will be sustainable after both years of planned activities.

An additional effect of the project’s implementation will be the creation of a research community equipped with tools for monitoring disability policies aimed at the social inclusion of people with disabilities. Moreover, we expect a new academic discipline to be formed in the political sciences – disability policies, subordinate to human rights, civic participation, and the rule of law. As it turned out, the project is a joint effort of a coalition of two non-governmental organizations of people with disabilities, Sofia University, and a private sociological agency. This organizational architecture – in itself – is an example of how work should be done in the field of disability, combining the interests of people with disabilities, the scientific potential of the academic community, and the entrepreneurial spirit of business.

The Draft of The Disabled People’s Law Is of Poor Quality And Noxious!

The deadline for making comments on the draft law of the people with disabilities at www.strategy.bg

END_OF_DOCUMENT_TOKEN_TO_BE_REPLACED 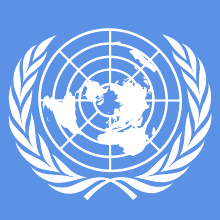 The twentieth session of the UN Committee on the Rights of Persons with Disabilities took place in Geneva on 3 and 4 September. At this session, the Bulgarian delegation was led by Mincho Koralski (Executive Director of the Agency for People with Disabilities), accompanied by about twenty representatives of almost all ministries and agencies related to the people with disabilities in Bulgaria. The purpose of the hearing was to provide answers to a number of questions raised by the Committee following the first Bulgarian report on the UN Convention on the Rights of Persons with Disabilities. In response, the Bulgarian delegation misled the Committee saying that the state was implementing disability policies in accordance with the Convention. None of the reports reflected the real situation of Bulgarians with disabilities!

END_OF_DOCUMENT_TOKEN_TO_BE_REPLACED 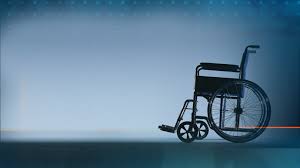 Personal assistance is “an instrument which enables a disabled person to lead an independent living (IL). Personal assistance (PA) is the direct and targeted financing of people with disabilities to pay the assistants for the work that a person needs because of a disability.

PA should be provided on the basis of an individual assessment of needs, depending on each person’s life situation and at prices appropriate to the cost of labor at the internal market. People with disabilities should have the right to hire and manage their assistants and to choose the employment model which best suits to their needs. Funds made available for PAs should cover the salaries of the assistants, their other costs arisen from their employment and legal relations, such as contributions for the employer, as well as the costs of providing the service itself, such as administrative and peer support for the beneficiary of personal assistance. “